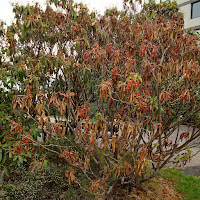 Just over three years ago I adopted three orchids. I found them in a hardware store, leftovers from a Mother’s Day sale, months before. The three were a sad lot. I made a deal with the manager and brought them home for $5. I blogged about how I nurtured them back to life. Two of them even bloomed again. I felt pleased, even proud. Then, two years later, I watch the weakest one die. I felt sad but also knew it didn’t have much a chance to begin with. I gave her my best, I thought, the other two will thrive.

Three years later only one survives and she too is beginning to wane. I turned to Google to find out where I went wrong and Google, in turn, led me back to the orchid, the substrate to be exact. It’s vital, I read, to have a healthy potting medium. The medium in my remaining epiphyte, sphagnum moss, was rotting. I took the sage advice and replaced the moss with fir bark.

I’m embarrassed to write this. I know that soil health is important. It is the foundation from which all plants flourish… I know this. I fertilize my other plants and keep a mental log of when to change the dirt and when to repot. I look for mold and fungus gnats and I am cautious in my watering. But, for some reason, I didn’t do so much with my orchids. Perhaps it was because they are epiphytes… they don’t need me as much; they are more efficient at finding their own way. Or perhaps, I just took them for granted: they can take care of themselves.

There is a two meter high rhododendron across the street. She sits on public land aside a path that leads to the sea. She is dying from thirst. I noticed the shrub's distress a week ago. It shocked me—why hadn't I seen it before? And then, why hadn't anyone watered her?

A friend on the island told me she was collecting grey water for her garden. I thought how difficult it would be for me to do the same. I live in an apartment, I told her, I have no garden and my sink is too small to accommodate a pail. I then remembered the orchid and my subtle arrogance that the plant should take care of herself. I thought again of the Rhodo, abandoned in the face of climate change, a victim of human excess. My excuses became pitiful as my complicity betrayed itself.

I now have a small pail in the sink and a larger one in the shower; I am collecting up to three buckets of water a day. It may not be enough but I am going to try and save that Rhododendron.

Vancouverites, on average, use 300 litres of water a day. That's each and everyone of us. Is it really necessary?

Here are some ways to reduce water consumption in the home.

If you like this blog, please "like" my FaceBook page and get notices on your timeline when a new article is posted.
Posted by Jo-Ann Svensson at 4:26 PM No comments:
Email ThisBlogThis!Share to TwitterShare to FacebookShare to Pinterest
Labels: environment, sustainability, water consumption 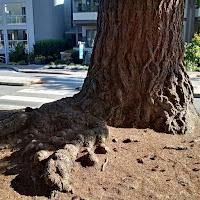 He came up to the till. His face, a ruddy red, was sweating from the unVancouver-like heat outside our air conditioned doors; his anger was palpable. It radiated from his eyes, his boxer-like stance and the faint curled lip. He brought up to the cash a bottle of Roundup.

After my greeting I said, Roundup is illegal to use in most communities. Check with your local government before using.

He stared at me, the curled lip broadening into a sneer, I live in North Vancouver.

The sneer almost grinned. He paid for his purchase and left.

He was a small man with roundish glasses and meek manner— my own Walter Mitty alive and well. In a chatty but quiet voice he asked for a refund: my soaker hose leaks in all the wrong places; its defective. I agreed to exchange it for a new one then casually said, I guess it’s a moot point right now with the drought, you can’t use it anyhow.

Oh, he said with light-hearted cheer, I cheat a little.

My colleague and I both stared at him. You can’t cheat, we said, don’t use it.

He looked up, flustered; amazed we would call him on this seemingly minor trespass. He quickly gathered his hose and walked away.

I drove to work the other day because I didn't want to bus and was too tired to walk. No one called me on it… only my conscience.


If you like this blog, please "like" my FaceBook page and get notices on your timeline when a new article is posted.
Posted by Jo-Ann Svensson at 9:08 AM No comments:
Email ThisBlogThis!Share to TwitterShare to FacebookShare to Pinterest
Labels: environment, responsibility
Newer Posts Older Posts Home
Subscribe to: Posts (Atom)