The Passion of Plastic

I recently had an interesting discussion on the parallels between the Pro-Life/Pro-Choice debate and whether or not stores should charge for plastic bags.

I kid you not. While the subject matter is definitively different, the passions behind it are not. I won’t go into the whys and whynots of the first debate—it is fairly obvious why there are extreme emotions. No, I will stick with the mystery of plastic.

I work part-time, as I’ve written before, in a building supply store. We charge five cents for over-the-counter bags. Now, I must admit, some people are fairly benign about this weighty payment. Others actively support it and a few, to my great appreciation, bring their own bag. But then there are those who feel, quite passionately, that I am stomping on their rights by charging for this service.

Here are a few dialogues to prove my point:

Me: Would you like a bag today, Sir/Ma’am?
Customer: (Sneering) Not if you are going to charge me for it.

Me:  Are you okay without a bag? (Reverse psychology usually works, especially when the items are easily carried out by hand).
Customer: (Incredulous) And HOW do you expect me to carry these things out to my car?
Me: Well, you may have brought your own bag…
Customer: No actual response except grumbled inanities and barely muffled insults. This is followed by an irritated grab for the items and an aggressive walk out the store.

Me: Would you like a five cent bag today?
Customer: (Arrogantly) I spend thousands of dollars here every year and YOU are going to charge me for a bag?
Me: Well, we are just trying to encourage people to bring their own.
Customer: Well, you just lost my business.

Customer: Just another example of businesses trying to make a profit off the backs of customers.
Me: Truly, sir, I don’t think so. Because if that is the way they are going about it, they should really go back to business school.

Customer: It’s the principal of it.
Me: (Silently… I haven’t quite got up the nerve to say this out loud). And your principal would be it is okay to continue polluting the earth with more plastic? My children’s children thank you.

Once when I conversationally said: It’s just that we have too much plastic garbage in this world. The customer said with open hostility: Don’t force your opinions on me.

But my all-time favourite response was when a customer demanded to see a manager. After a long dawn out one-sided argument the customer concluded with:

I’ll show you, I’ll bring my own bag next time.
Uh huh.

So here are several facts about plastic pollution that we don’t necessarily witness in our daily life but I feel we really need to know. (Uhhh, excuse me if I just forced my opinion on you.)

And I haven’t even begun talking about nurdles.
So, while we all know it’s great to recycle the key is to reduce. Let's take our own bags to the store: food, drug, clothing or building supply. Our children’s children will thank us.
Posted by Jo-Ann Svensson at 8:35 PM No comments:
Email ThisBlogThis!Share to TwitterShare to FacebookShare to Pinterest

The MacLean Method: A Coming Home 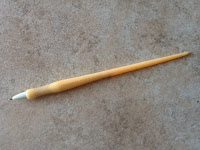 A few days ago a friend posted an image on FB that raced me down memory lane.  On the surface it was just a picture of a Vancouver School Board pen, circa 1969. But it was much, much more than that. It was the coveted stylo won for best penmanship in my grade three class. Eight years old and hopelessly in love with my desk partner, Eric Rose, I hungered for the yet to be won prize.

Back straight, wrist held at just the right angle… I practiced daily at home and school to get those rounded curves in line with the strong, forceful backbones of what was known as the MacLean Method.  An elegant mixture of feminine and masculine each letter had its own identity … not just by virtue of its name but due to a swirl here, an elongated tail there. The small p, for example, extended its spine high above its ovular face while the small r swept up the left side, looped imperceptibly and then, with a short, gentle slope to the right, completed its journey by dramatically sweeping down with a slight inward curve to welcome the next letter. And all letters, even some of the capitals, began and ended with a tail, one to introduce and the other to conclude but always ready to link, to connect, to make words come alive.

The MacLean Method was created by HB MacLean, a Maritimer by birth who came to BC in 1909. Heading up an education commission he took an oft heard complaint of teachers— the poor handwriting of students—to heart. Within a few years his writing text books were de rigueur in BC and his cursive style one of the newer commodities to travel the country.

My mother was a pupil at Vancouver’s St. Pat’s Catholic School in the 1930s. She was still writing in perfect form fifty years later. Recently I watched an older First Nation’s man sign his name … I could have sworn my mother was directing his hand. My friend, the one who sent the image of the pen over FB, said when reviewing old letters sent to her mom by friends it looked like her mom was writing letters to herself.  The method was nothing if not persuasive.

Still, my mom’s version of this venerable technique was unique and flagrantly hers. Four kids, ailing parents and a problem with the bottle may have dampened her creative impulses elsewhere but her writing was something to behold. It was beautiful—a tribute to the concept that form provides the structure to the imaginative process. Her version nudged the slant of the letters a bit more to the right, added some swirls and a few extra waves. There was no heart dotting is  or overly rounded letters, no, her cursive brought to mind the art deco period with bold moves and elaborate ornamentations.

I practiced the MacLean Method in my mom’s old scribbler with countless lines of As, Bs and Cs. I never fully understood why the capital Q looked like the number 2 but it wasn’t important. What was important was the prestige. It wasn’t just the prize for best penmanship, that oh-so-sleek feminine pen with its long slender neck; no, in retrospect, I think it was my mom’s pride with which I yearned.

I eventually did receive the honour of being the first of my class to write in ink. I don’t remember that moment as much as I do the process but, yes, I did bring home the prize. Eric, my unrequited love, moved away in Grade four and my mom, well, as already said, continued to write well and I continued to imitate her motions. But it was near impossible—her script was so inherently hers, I could never quite touch on the vital energy that nurtured it.

My mom died in the late 70s. I went through a long period of anger towards her after she passed. There are a myriad of reasons for this, some of them even valid, but I wonder if at the core, it was because she left before she could see the woman I became. I told myself for years I didn’t want to be anything like her and purposely walked paths she never did. Of course it never quite works out that way— I became a bit too dependent on wine in my twenties, was prone to bursts of rage and developed the same sleeping habits—but I fooled myself for years that I had left her behind. Even when I stopped trying to match her penmanship I still found myself drawing the poinsettias that she had so carelessly doodled on any scrap of paper.

My mom was a powerful force. I imagine when I brought home the pen that day she expressed her pride and I glowed for awhile. I just don’t remember. What I do know, however, is that she helped shaped me into who I am today. Back in those innocent years of primary school she praised my stories and told me I was a good artist.  She didn’t stop me when I rambled on too long and watched, with admirable patience, my self-choreographed dance routines.  And while my cursive abilities have long dropped by the wayside of award-winning ranks, today I consider myself a creative and artistic woman … just as she implied so many years ago.

Perhaps then, I owe more to the MacLean Method than just respect as a style mentor. It provided, in some small part, the structure for both my mom and I to survive the chaos that followed those early years. For her it brought healthy expression to an imagination held hostage and for me, hope—hope for the future and a burgeoning trust in the process.

In revisiting those elegant letters today with their co-joining links and infinite bonds, I connect with memories both good and bad. Mom and I, two women who lost their way, are coming  home.
Posted by Jo-Ann Svensson at 10:35 AM No comments:
Email ThisBlogThis!Share to TwitterShare to FacebookShare to Pinterest

A Plea for Organ Donation


My brother, Carl, was 40 when he received his new heart. It arrived just under a year after being placed on the waiting list. I saw him a couple of month before surgery when he came to Vancouver with his two young daughters and wife. Watching this man who introduced me to hiking and once cycled across Canada was humbling. He maintained his good humour even when fifty feet of walking caused him to become breathless; he carried on, finding his footing while mortality dogged him every step of the way.

Finally, someone who was on the organ donor registry did pass on. A man, 10 years my brother’s senior, died in a car crash. The match was good and Carl was given a precious gift.

Carl just celebrated his 55th birthday. Although on anti-rejection drugs for life, he is once again a healthy man who cycles, cross country skis and works in the garden.

He tells me that the average life span of a transplanted heart is 24 years. The longest anyone has lived is 30. At fifteen years and going strong, he aims to beat that record.

I write this because there are always people waiting for organs. My brother was lucky, many are not. If you have not already done so, please register. And, if you are not sure if you are on the list, you can checkit out here.
Posted by Jo-Ann Svensson at 6:05 PM 2 comments:
Email ThisBlogThis!Share to TwitterShare to FacebookShare to Pinterest
Newer Posts Older Posts Home
Subscribe to: Posts (Atom)