Anyone else still seething after watching Kirsten Powers shut down a CNN colleague over calling US Senator Kamala Harris “hysterical”? Watch the original interaction here and judge for yourself how “hysterical” Senator Harris was.

Ms Harris is not unstable nor at loose with a wandering womb, she is a well-educated, focused and intelligent Senator who was not only the first woman attorney general in California but the first Jamaican American, the first Asian American, the first Indian American and the first African American attorney general in California. Listen to her questions. She is not attacking Attorney General Sessions with loose founded accusations but asking questions like the dogged prosecutor she once was. Jeff Sessions, in turn, acts like the affronted southern gentleman who cannot understand  a simple question but then who wily tries to obfuscate the hearings by answering Senator Harris’ questions with tangential meanderings.

Hysteria was a 19th century medical term given to women who, among other things, had a “tendency to cause trouble”.

It is a term used today to shut women down.

Similar to how Senator Elizabeth Warren was told to “be quiet” after trying to read aloud a letter written by Coretta Scott King about, ironically, Jeff Sessions.

To me it is in the same vein as men calling women “girls”. In 2013 I blogged about this when I did a short stint as a sales clerk in a hardware store. I saw how guys didn’t like it when I turned the tables. I wrote: Last month at my day job, a twenty year old young man wished me and two other women, all three of us at least twice his age, a goodnight. He said: G’night girls. I responded back: G’night boy. He did a double take; he hasn’t done it since.

Ask yourself why women employees are usually called girls while male workers are always referred to as “men”.

I know that some of you may be saying that this is unimportant in the big scheme of things. To which I argue, so violence against women is trivial? Calling a woman hysterical, telling them to be quiet or calling a work colleague a girl sets the stage for disrespect. Disrespect says: you are not enough as you are, you are not in control of your faculties, you are immature, not smart, able or creative enough to be heard. It reinforces the implicit hierarchy in our society that states females, no matter what age they may be, are somehow less than, not quite up to par or of needing male guidance.

Disrespect dishonours boundaries. It invites condescending and paternalistic behaviour.  Disrespect is the precursor for an unspoken violence that threatens and sometimes acts on physical abuse. Disrespect is contagious and insidious. How often have you heard women themselves call other women bitches just because they are assertive and show leadership? How often do we quietly internalize the patriarchal hierarchy and silence ourselves?

We need to remember Senator Mitch McConnell’s unintentional rallying cry to feminist everywhere when he tried to condescendingly defend the silencing of Senator Warren. He said: “She was warned. She was given an explanation. Nevertheless, she persisted.”

Yes, let us not be shut down. Let us all persist.

Posted by Jo-Ann Svensson at 6:08 PM No comments:
Email ThisBlogThis!Share to TwitterShare to FacebookShare to Pinterest

The Earth Before Us 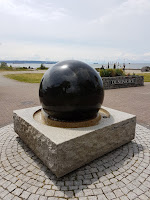 I sit on the waterfront as the earth rotates before me. I’m not being metaphoric; the world truly does spin in front of my feet—albeit a granite facsimile of one. The one metre sphere, carefully etched with the seven continents, sits on a bed of pressurized water. It is a gift from Germany celebrating our nations' friendship. The result is a free floating globe that fascinates and provokes people of all ages.

As I watch some boys play on the globe’s granite foundation. They splash and press their fingers upon the polished surface, tracing the coastlines with curiousity and perhaps even some awe. Others press harder with boyish determination. Their goal is to make the world momentarily stop and begin rotating in a new direction upon some other unseen axis. Amazingly it works. It’s a remarkable gift these Germans have given.

I think about the state of the world’s affairs as I watch the playful antics of these children. How often have we witnessed, maybe even been a part of, the altering of the earth’s natural course? We have diverted waterways; blown holes through mountains and dug deep into the earth’s core for minerals. We have polluted our global home with an oil obsession and an addiction to smart phones; corporate farming and a careless use of plastics. From smog to oil spills; plastic wastes to radiation leaks we are succeeding—with no real hardship on our part—to alter our world. Some would say destroy.

The granite globe continues to spin. Its imaginary axis—adjusted by countless of kids imposing their will—pierces through the heart of Russia and Tierra del Fuego. The world would face a very different reality if this were true. Here in Vancouver we’d be experiencing what our northern cousins currently endure: the decay of permafrost and eroding coastlines; the warming of waters and negative impacts to local wildlife. Melting icecaps and rising water levels—island nations dying.

This is what happens when you alter the earth’s natural balance.

More kids have come and gone as I sit in the sun and watch, as they say, the world go by. The earth continues to spin but with erratic consistency. It all depends on who holds the power, you see, whose hands direct the flow. The makers of the granite globe say that when left untouched, the sphere will eventually rotate around the Earth’s natural axis, the one pointed towards the Polar Star. Homeostatis, if you will.

I have yet to see this happen—too many muddling hands on my watch—but I hope it is true. Gives me hope, metaphors aside, for the real planet Earth.