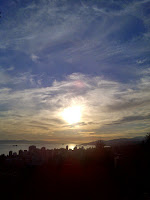 A middle aged man, red in face and loose in jowls, talks aggressively into his cell phone on a busy sidewalk: I am not worried about that. I am concerned with giving investors a good return…

Curious what he is not concerned with … Government regs? Environmental protection? Child labour?

A neighbour appears at my door, flustered and irritated. Are they using chemicals outside? She was referring to the workers pressure washing the driveway of our apartment block. The spray is going everywhere and I have an expensive car.

Curious why she wasn’t worried about her own health (if, indeed, there were chemicals), that of the passer-bys or the myriad of shrubs and trees that share our space.

I politely ask a customer at my part-time job if he really needs a plastic bag. He is young and has only three, easy-to-carry items. I say: we have too much plastic in this world. He complains; the company sides with him.


Two more strikes and I am out. Oh well.

I‘ve been getting kind of depressed thinking about how blind we can be as humans; how deep we can sink into our own little worlds and we fail to see the big picture, let alone our neighbours. But then I listened to Ideas with Paul Kennedy on CBC Radio One. My mood lightened up considerably.

Although the show was about alternative currencies the theme coincided with the idea of “co-responsibility” and how to transform societal problems into solutions. The broadcast began with an interview with Jaime Lerner, the former mayor of Curitiba. Mr. Lerner is the inventor of “garbage currency”.

You can listen to the interview here but, in short, about thirty years ago Curitiba, and more specifically its slums, was literally swimming in garbage. Not only did it float by in streams and rivers but children played in the dumps, rats and wild dogs ravaged the debris, and pedestrians walked through it knee-deep just to get home from work. Even the garbage trucks couldn't get through as  the roads were impassable. Today, however, this city in a southern province of Brazil is known as the eco-capital of the world with lots of urban parks, miles of bike paths, and an excellent transit system.

In 1989, Mr. Lerner knew something had to be done ... so he did something radical, he bought the garbage. For each bag of garbage delivered to the land fill by a local resident, he paid the seller bus tokens. Within three months the slums were clean. Then, when he found the landfills overflowing he started a segregation program. It was first taught in the schools but very soon households were separating out organics and recyclables. People caught on very quickly, considered it their "civic duty", especially when they saw the visible effects of newly created parks without the dread of disease and rabid dogs.

Mr. Lerner then took on the bay on which his city bordered. It was filled with trash. He paid fishers for any garbage caught. As the bays cleaned up more fish returned. And, with the money made by selling  recyclables snagged out of the bay, the mayor paid the fishers.

The mayor did not have money for a new transit system. So he worked out a deal with the private sector to buy a new fleet of busses. Investors got paid per kilometer travelled while the city took care of labour and scheduling. The system paid for itself and is now known as one of the best in the world.

The solutions to big problems like pollution, climate change and poverty are within us. We don’t need big money to save us, just a little bit of co-responsibility and thinking outside the box. It can be as simple as just saying no to plastic and walking to the store instead of driving. Every things counts.

We are the solution.

For another excellent (and humorous) example of transforming problems into solutions check out this one minute video.

Note: Curitiba does have its detractors and some say it has slipped from its eco-capital status. Read here for more info

Posted by Jo-Ann Svensson at 7:59 AM
Email ThisBlogThis!Share to TwitterShare to FacebookShare to Pinterest
Labels: environment, responsibility